Skip to content
Previous Next
What is Portosystemic Shunt: Abner’s Story

What is Portosystemic Shunt: Abner’s Story 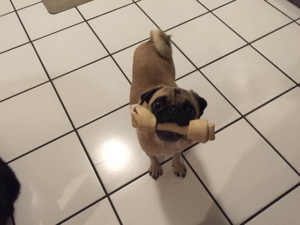 Have you ever found your pet behaving a little odd? That was the case back in the summer of 2016 for Missy’s then four-year-old pug named Abner.

Abner was seen at Seminole Blvd Animal Hospital for a physical exam because Missy was concerned that he was simply not acting right. Abner was moping around, not wanting to play, drinking more, walking strangely and not eating as much. Typically Abner loved his food!

To find the cause of Abner’s symptoms, the SBAH team did blood work, radiographs (xrays) and an abdominal ultrasound. The ultrasound showed that he had a relatively small liver, his stomach was still full (despite fasting overnight) and a small stone was found in his bladder. As the ultrasound did not get to the bottom of Abner’s issues (the shunt was not obviously visible), he was taken for an exploratory surgery. At surgery, an abnormal vessel, called a portosystemic shunt, was found bypassing Abner’s liver. This vessel was able to be closed & corrected at surgery. He also had the bladder stone removed during the same surgery. This stone turned out to be a urate stone, which had been caused by his liver disease (shunt).

Following his surgery, until his stitches were removed, he was confined to the house and only permitted outside while on a leash for bathroom breaks. He was also fed a special diet until his liver related blood values returned to normal. After the surgery Abner returned to the happy and healthy pup he was before.

What is Portosystemic Shunt (PSS)?

A liver shunt (PSS) is an abnormal vessel that allows blood to bypass the liver. This disruption means that your pup’s body is not receiving the nutrients that it needs, ultimately hindering its ability to function efficiently. It also causes toxins, which are usually removed by the liver, to accumulate in the body. There are two types of shunts: one that the pet is born with (80% of PSS) and another which develops over time (20%).

Dogs with liver shunts usually will experience a combination of the following symptoms:

As in Abner’s case, a series of tests including blood work, urinalysis, x-rays, ultrasound and surgery may be required to make a conclusive diagnosis of a liver shunt. Surgery is the treatment of choice for most patients with this condition and if surgery cannot correct the problem, then at least a biopsy of the liver should be taken to direct further care.

In animals that cannot be resolved with surgery, a prescribed diet that reduces the level of protein byproducts can be used in addition to medication. The medications help in managing this condition by reducing the number of bacteria in the gut and lowering the pH, which curbs the absorption of ammonia.

f you feel like your pet is experiencing similar symptoms to Abner it is recommended that you have them examined as soon as possible.