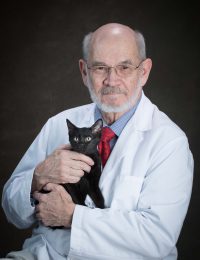 Dr. Ernest Godfrey decided to become a veterinarian at the young age of 11. After graduation from high school he attended the University of Florida to study for his pre-veterinary work. He went on to receive his doctorate in veterinary medicine from Auburn University College of Veterinary Medicine in 1968.

Dr. Godfrey settled in Pinellas County and opened Pinellas Animal Hospital in 1973 with the goal of serving companion animals in the Pinellas Park area. In 1990, he opened Seminole Boulevard Animal Hospital in Largo. Through continuing education, both he and his staff keep abreast of new advances in veterinary medicine.

Since graduation, Dr. Godfrey has been very active in both veterinary and community activities. He has served the Florida Veterinary Medical Association in many capacities, beginning in 1987 as Treasurer and as President in 1993 and 2005. He was recognized as FVMA Veterinarian of the Year in 1990 and as Pinellas County Veterinary Medical Society Veterinarian of the Year in 1992. He was also recognized by the FVMA with the Gold Star Award in 1980 and 1988. Dr. Godfrey sits on the board of directors of the Central Florida Academy of Veterinary Medicine and on the FVMA Technicians Committee. He also serves on the board of directors of the Pinellas Animal Foundation which focuses on educating the public about proper pet care.

Dr. Godfrey and his lovely wife, Rossie, have two sons and a daughter, Will, Walter and Maia. They live together in Seminole with their dog Sally and cats, Casper, Coconut, Danny, Domino, Piper and Duke. 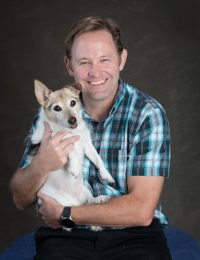 Dr. Clark MacCullough’s interest in animals started as early as he can remember. While growing up in Tampa, he had a variety of pets including dogs, rabbits, lizards, snakes, fish, turtles and a multitude of birds. Prior to veterinary school, he attended the University of Florida (Go Gators!) to receive his Bachelor’s and Master’s degrees of Science. He then went on to graduate from the North Carolina State College of Veterinary Medicine in 2004. For the first couple years after graduation, he worked at an exotic animal hospital in southeast Florida where he became well versed in basic husbandry as well as critical care medicine for many different species.

When he is not working, you can find him playing tennis, watching sports or at home with his family. Rachel and Dr. Clark share their home with their son (Kellen), and multiple pets.

Melissa started at SBAH as a volunteer in 2010 and was hired early 2011. Since then, she has graduated from St. Petersburg College in 2012 with her degree in Veterinary Technology, received the Certified Veterinary Technician of the Year 2021 award from the Florida Veterinary Medical Association, and worked her way up into management. She lives in Seminole with her husband Brian and two cats, Toro and Pete.  In her free time, Melissa enjoys boating, going to the beach, biking, and playing video games. 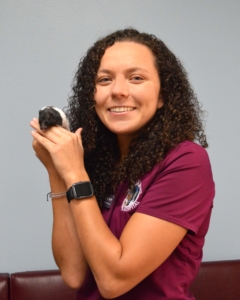 Lainey moved to Florida from Chicago in 2009. She started working at SBAH in August of 2018. She graduated from the SPC Veterinary Nursing Program in 2020. Her pets include a turtle named Francis and a cat names Artemis. One day, she hopes to work in the marine mammal veterinary field or with exotics. In her spare time, she likes to scuba dive, play pool, travel, and explore the outdoors. 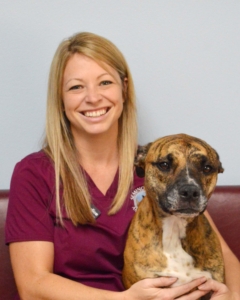 Candice has been working in the veterinary profession for 21 years. She is a veterinary Technician and has loved animals since she was a young girl. Candice worked at Seminole Blvd Animal Hospital for 17 years before taking time off to get married to her lovely husband, Christian, and raise her two amazing little boys, Mason, 5, and Bryson, 2. Candice then worked with us as a relief tech for 4 years before finally coming back to work part-time with her SBAH family. Candice has two dogs: an 11 year old Chug named Bella and a 4 year old Boxer mix named Shyla. She also has two cats, Felina and Mariah. In her spare time she loves to be with my family and friends, travel, and cook. 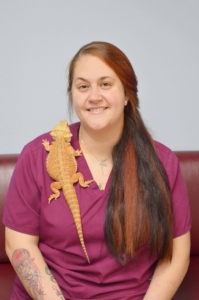 Audree joined our team in the summer of 2021. She graduated from Tarpon Springs High School in 2009 as a vet assistant and has been a technician for over 12 years. Audree is married with 2 daughters who are 9 and 11 and has 12 pets.  She Loves spending time with her kids and being outdoors. Being a veterinary technician is the best and most rewarding job for she has ever had. 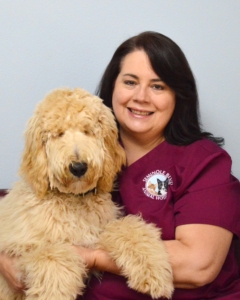 Jeanie joined our Seminole Blvd Animal Hospital team in July 2020. Jeanie previously worked in the real estate and banking field but decided to follow her heart and work with animals. Jeanie is very compassionate and believes she has found her perfect career.
She moved from Missouri to Florida in 2015 and currently lives in Seminole with her husband and two goldendoodles, Lexi & Brody. In her spare time, Jeanie enjoys hosting parties, camping, spending time with her grandchildren, and gardening. 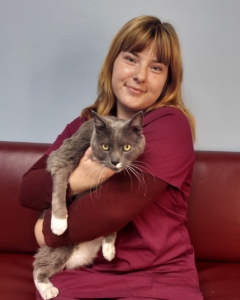 Kalisti moved to Florida from Utah in 2016. She graduated high school in 2021 and studied Biomedical Chemistry for a few semesters in college. She decided that she wanted to fast track her veterinary technology career and decided to learn firsthand how to care for animals here at SBAH. She has two black cats named Nine and Dark Lord and helps take care of her nephews in her free time. She enjoys reading, dancing and exploring nature.

Take a moment and view our interactive virtual tour and learn firsthand what you can expect to see when you arrive for your next appointment. If you have any questions before your visit please do not hesitate to give us a call at (727) 587-0200. We look forward to meeting you and your furry family member soon!